Composting > How to Save Water with Composting Toilets 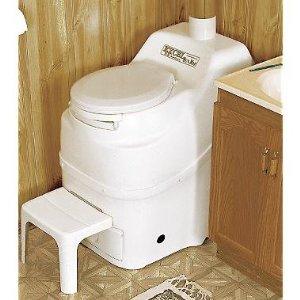 If you brought up the subject of  composting toilets with most people in North America, you would very likely be greeted with blank stares or perhaps smirks. Nevertheless, composting toilet systems are a solution to deal with human waste and they have been in use throughout civilizations since the dawn of time. Only in very recent history has modern plumbing displaced the use of this method of managing the waste produced by humans.

The bottom line is that composting toilets are simply devices that facilitate the composting process of human feces and this practice can be said to be as old as the hills. It is nothing more and nothing less than Mother Nature’s way of recycling human waste components, just as it does with the waste of other living beings on the planet, and reintegrating it with the soil as part of the cycle of life.

While many people have negative opinions regarding composting toilets, the truth of the matter is that when they are operated correctly, they are clean, efficient and hygienic, and do not produce unpleasant odors. One of the benefits of them is that they save a great deal of water, and in a time when many experts are concerned about the need to conserve water, these toilets could be a viable solution.

For instance, consider a typical American family that uses a flush toilet. It has been estimated that a family of four can flush about 100,000 liters of water each year, just to deal with their human feces. And, this water goes into the sewage system which has the potential to contaminate ground water sources. But, compostable toilets actually protect both surface and ground water supplies from this kind of contamination.

These kinds of toilets are most often constructed with two separate chambers which facilitates operation and also ease of construction. The two chambers of the composting toilet are used alternately. Once full, the one chamber is closed and allowed to decompose while the other fills. When fully decomposed, the contents are removed and the chamber is ready to be filled again. Each of the chambers has a separate opening that allows for the removing of the mature compost which is non-odorous and which can be used in organic farming practices.

Family units can easily utilize composting toilets and they are also able to be built in cluster units so that they can be used in larger facilities such as hostels, schools and other public buildings. It is recommended strongly that this approach only be used in communities where there is a high level of public awareness and education about the proper use and management of composting toilets.